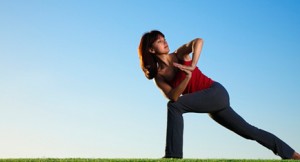 Previous studies have shown that yoga can be an effective treatment for chronic lower back pain. But how often does a person have to go to see any relief?

Researchers at Boston University School of Medicine and Boston Medical Center say once a week may be just as beneficial as twice a week. They found that participants who attended a weekly yoga class provided similar lower back pain relief and reduced the need for pain medication as twice weekly classes in lower income minority patients, according to a news release from Boston University Medical Center. The results of the study indicate that patients interested in trying yoga for lower back pain could benefit from attending a medically appropriate weekly yoga class.

The study, published in Evidence-Based Complementary and Alternative Medicine, was led by first author Dr. Robert Saper, associate professor of family medicine at BUSM and director of integrative medicine at BMC.

While researchers have already shown that yoga can help chronic lower back pain, few studies have studied this among specific populations.

“Lower income patients often have worse lower back pain due to limited access to both mainstream health care treatments and complementary treatments such as yoga, massage and acupuncture,” Saper said.

For the study, researchers followed 95 people over 12 weeks, dividing them into two groups. All had low incomes and suffered from moderate to severe lower back pain.

One group attended a yoga class once a week and the other attended twice a week, and both groups were encouraged to practice the poses and techniques at home. At the end of the 12 weeks, both groups of participants experienced similar and substantial decreases in their pain level and need for pain medications, but there was no additional benefit seen in those attending twice a week.

“Given the similar improvement seen in once weekly yoga classes, and that once a week is more convenient and less expensive, we recommend patients suffering from lower back pain who want to pursue yoga attend a weekly therapeutic yoga class,” Saper said.

+ Read about the full continuum of care offered at Virginia Orthopaedic & Spine Specialists. Patients may seek treatment at any of our facilities in Hampton Roads or receive specialized care at home or through Bon Secours In Motion.